.Q: I’ve only been with my current boyfriend for about 3 – 4 months. He told me that because he’s Muslim, he can have as many women as he can afford. He wants a wife and a girlfriend. I did not like the idea at all and he says that if I really want him in my life, that I would try it for him.

I still disagreed, because I want one man who loves me and only me unconditionally. The problem is that I still want to be with him because I really enjoy being around him.

He told me to give him a month to decide if he can give up the idea of having a wife and a girlfriend and just be with me. I don’t even know what to do or think at this point because I feel like he’s never going to let go of that idea.

A: I don’t know if he’ll ever let go of that idea, but if you stick with him, there’ll be plenty of other ideas or differences you may want him to let go of in the future.

For that reason, I believe every woman should have a list that she uses as a measuring stick to decide if a guy is worth it BEFORE she gives him the time of day. Because after you’ve spent copious amounts of time with him, it’s easy for your heart to manipulate you into thinking he’s the one for you—even if he’s not.

Wherever your treasure is, your heart will be there too… Matthew 6:21

Your time, money, and body are treasures! Wherever you place them, your heart can’t help but to be all in. And when you try to back out of a relationship where your treasures are invested, your heart says: “Too late, I might already love this guy” – making it harder for you to move on.

At the top of your list, there should be at least 4 deal breakers or non-negotiables that keep your heart in check. They are the things you value most in life.

Deal breakers are not to be confused with preferences. Preferences can be negotiable if a guy makes it past your list of deal breakers. They tend to be somewhat shallow, like for instance, your preference for a man who’s 6ft tall.

Deal breakers are going to be different for every woman, but religion should be on the list IF your lifestyle is governed by it. There are soooo many religions and soooo many disagreements between the religions that you can’t afford to just wing it.

Do not be unequally yoked together with unbelievers (II Corinthians 6:14).

A yoke is a bar that connects two oxen to each other and to the load they’re carrying. Not only do the oxen have to be partners, they have to agree on which direction to go in and the pace that both of them are comfortable with.

When the oxen are unequal, that means one of them is slower, taller or weaker than the other one, making it extremely difficult or impossible 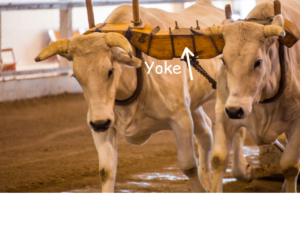 for them to get the job done.

It’s easier to date someone of a different religion because you aren’t pulling the same load right now. There are no kids, bills or mutual responsibilities to exploit your inequities.

And to be quite frank with you, there are plenty of marriages of the same religion that are also unequal. Plenty.

But when you marry someone of a different faith, God says you’re unequal from the start.

Your relationship with God is at stake if your (future) husband wants you to live a completely different lifestyle than what He has planned for your life.

Although interfaith marriages are on the rise, research suggests that they are more likely to end in divorce than a marriage consisting of two people of the same religion. Mostly because the couple isn’t aware of just how serious their differences are before they get married. They’re banking on the love they have for each other. But unfortunately,

Let’s say you’re his only girlfriend right now, so you decide to continue dating him. Before you fall deeply in love with him, you need to know:

I could go on and on, but I want you to think about what you want.

In your own words Sara, you want “one man who loves you and only you unconditionally.” And without a doubt, you absolutely deserve that!!!!  Kudos to you for knowing what you want.

Marriage is the most connected you’ll ever be to another human being. It’s important that your lifestyles align in the things that matter most to you.

You owe it to yourself to research all the religious and cultural differences that could raise issues in your relationship, before you go any further.

If you have any more questions, I’m here for you.